On this page you can read news about our ministry

In the last month we have had a small Easter party and celebrated Thai New Year, Songkran (a water festival) togather with the youth and the children from our Saturday and Sunday school.

We had planned a larger Easter party, but because it coincided with a Shan Buddhist festival, we were not able to gather so many. But about 30 people came, also some adults and we had Easter eggs, food, sweets and we shared the Easter's message.

During Songkran we had around 20 youth who came too. Before we went out and had a water fight, I shared with them that they are very important. They are all VIP's.
The Shan people really need to hear this, as many people have a low self-esteem.

I also teach more English now and there have bee coming some more local Thai's from the village we  have our ministry in too.

A Need We Have
A need we have right now is to have one more car.
At the moment we only use my car and it's difficult to run the Saturday&Sunday school when I am not there. Like now when we will travel to Myanmar.

We could also have picked up more children/youth and be more efficient if we had a car for the ministry.

Pleas pray with us for this.  (Please feel free to contact us for more information, if you want to help)

We also pray for volunteers who can help us with children and youth ministry and teaching English for a shorter or longer time (see Teams&Volunteers).

A New Place With Grate Opportunities 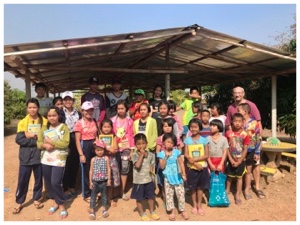 We are in one of the hottest months of the year now, and the summer vacation has already begun out here, but in our ministry we are not going to have a vacation right now.

This newsletter will mainly be about a piece of land we have rented for our ministry: Good News for the Shan, which has been an answer to prayer for us and has a great potential for the future and we have already seen some good results by just having it for a few weeks.

Got a Heart for a Village

When I moved to Thailand as a missionary for the first time in early 2000, I was quite sick and did not do a lot of ministry, but I had a motorcycle. I took a ride on my motorcycle every day on a hill where I had a good view of the whole Fang valley, and I prayed for the Shan people and that people should hear the Good News here. I also prayed for a village behind this place, and this is where we now have rented a piece of land and have a lot of our ministry.
I got a heart for this place and the village, but it was quite far (about 30 minutes with car) from where we started the ministry I was part of until 2016 (2003-2016) and we did not have much activity there, just a few sporadic house churches. 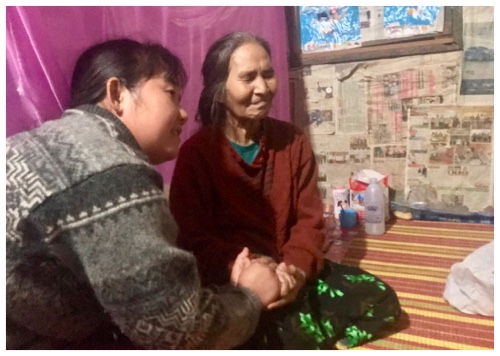 ust before Christmas, our co-worker Tip got a phone call from a daughter of an older lady who became a Christian a few years ago. This older woman, about 68 years of age, had partially left her faith, but when she got sick she told her daughter that she just wanted to get in contact with us and be prayed for by our God. She did not want a witch doctor or Buddhist amulets, which is quite common to go to or get in this culture when you are sick.
When we visited her, she had already been in hospital for a week. She had only gotten worse and there was blood coming out of her nose, mouth and even her eyes.
She was very glad that we came, but could not talk much.
She cried some when we laid our hands on her and prayed. The daughter, who is not a Christian, also cried.
After we had prayed, the daughter asked what happened when we prayed. Our co-worker Tip said: When we prayed, the power of God worked, and she will eventually get better and will completely recover.
I was thinking in my mind that I really do not hope that we only give some false hopes, because God really had to do a miracle with this woman, and I do not know if I had as great faith as Tip had. When there is blood from the nose, mouth and eyes, it is a strong indications that they are at their last hour in life and many believed that too with this woman.